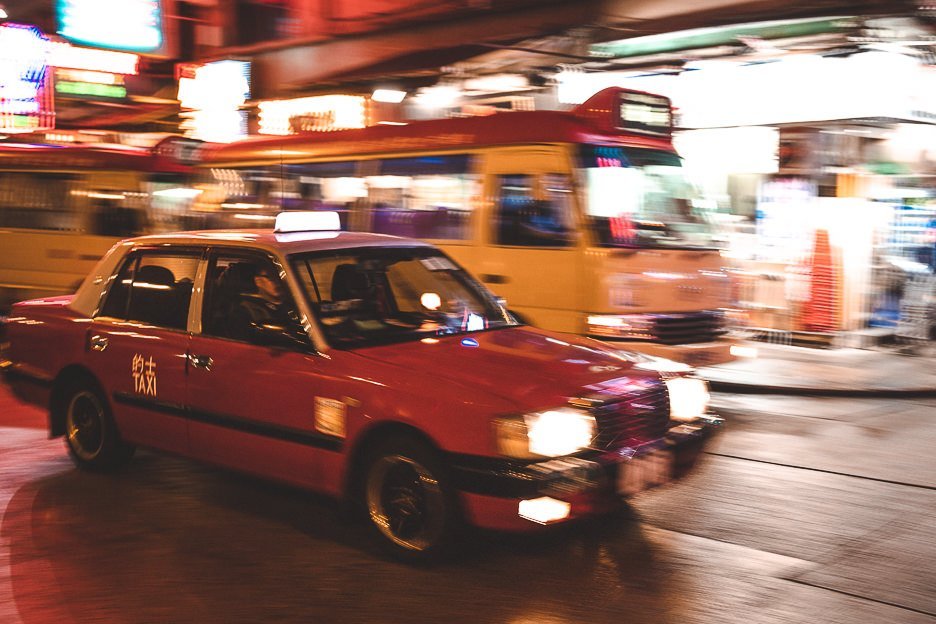 It’s 9:53pm on a Saturday night. The drizzly rain dampens our jackets as we hop off the number 112 double decker bus. Tetris blocks of glittering banners blaze up ahead, an array of alternate flashing lights and caterpillar trail light bulbs encircling rectangular billboards. I find myself likening the scene to the Strip in Las Vegas, except instead of casinos and theatre shows, the technicolour neon signs promise goods and services that I unfortunately can’t decipher.

Commuters surge out of subway stations and car horns blast as non-attentive pedestrians scuttle across the road like startled rabbits. A man to my left hacks up spittle on the sidewalk (thankfully landing nowhere near my feet), while a petite girl with knee-high socks and blunt fringe juggles a smartphone to her ear while jumping and waving to an acquaintance in the distance. It’s our last night in Hong Kong. Armed with a new Canon 50mm lens, my boyfriend and I are eager to explore the neon lights of the Mong Kok district to practice our street photography. At this hour, the borough shows no signs of falling asleep and there are a string of characters with stories to capture.

We have no planned route, only some rough checkpoints on our map. We head towards the goldfish market but we’re a moment too late, the last roller door clattering down signalling the end of another day’s trade. Retracing our footsteps to the main road, we meander down another side road full of pet shops. Glass boxes housing mewling kittens and puppies are melting hearts of prospective owners and I can’t help but coo at their cuteness too. 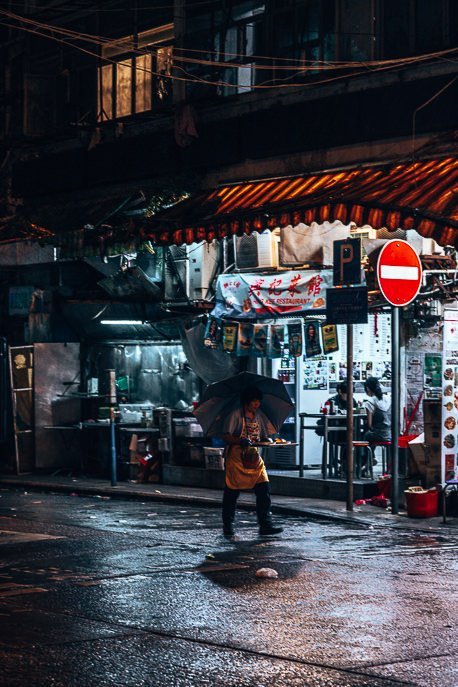 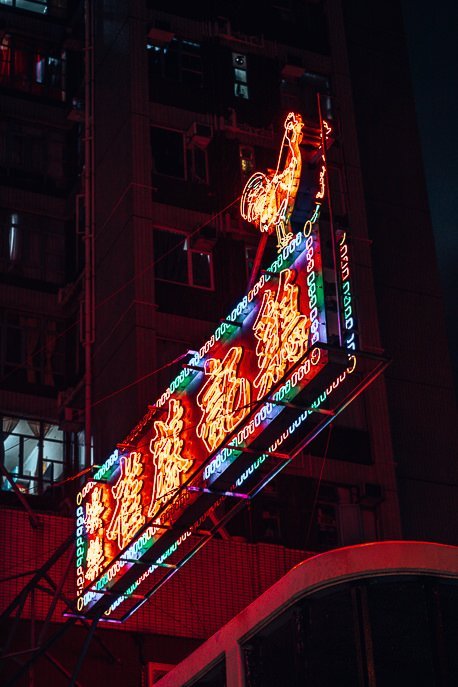 My stomach starts to growl. We’ve been browsing a few restaurant menus but nothing has particularly tickled our tastebuds. Feeling as though we’re amidst “tourist territory”, I’m also sensitive to food quality and price. I pause to check our location on Google Maps. When I look up, I catch sight of a couple holding takeaway bowls of skewered deep fried something. I hazard a guess that it’s street food and it must be nearby. Another boy with Harry Potter-esque glasses walks past me, shovelling delicious morsels into his mouth from the same shaped takeaway bowl. The universe is clearly sending me signs to follow these clues to epicurean treasure.

My quest is a short, steaming success. The trail of clues has led me to a greasy spoon at the end of the street. Skewers of meat, seafood and other unfamiliar stuff lie on beds of ice ready to be marauded by other ravenous pirates. Guarding the treasure is a short lady wearing an apron covered in grease stains, her brow emitting a sheen from the hot steam. I’m hoping my share will be some familiar looking dumplings and I point at a pile, asking if they’re chicken or pork.

She clearly won’t relinquish the booty without a fight. She holds up a hand and 1 thumb and says “20 dollar”. Six fat dumplings for HKD 20. Who knows what’s in there but I’m willing to take my chances. She drops the half dozen dumplings in a vat of bubbling oil – plonk, plonk, plonk. As I’m fumbling for cash, she’s whipped the oily pieces into a polystyrene box and holds out a hand waiting expectedly for payment. I walk away victorious, clutching my newly acquired prized possessions.

There’s nowhere to sit so we start walking towards the Ladies’ Market. It’s soon revealed that my eating and walking skills need some work so we pause at an intersection so I can focus solely on the eating part. The filling turns out to be a mix of minced meat and cabbage. The pastry is crunchy while the salty meat satiates my savoury craving. Oil dribbles down my chin and I slurp up every bite. Shoppers rush by, bumping me slightly but they don’t notice another Asian girl wolfing down deep-fried street snacks. I’m fitting in better than I expected. 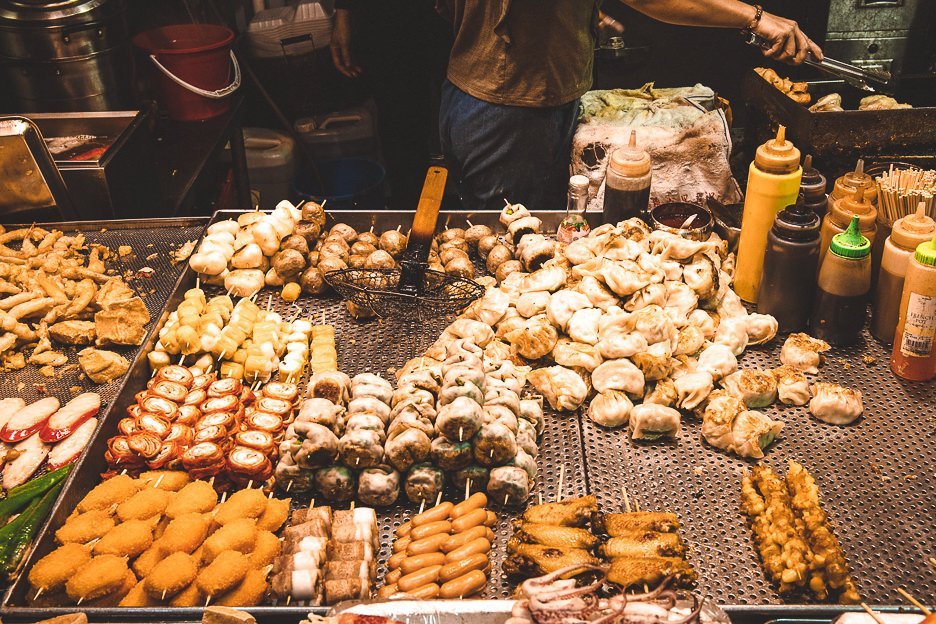 At the end of the Ladies’ Market, we walk one street over and unravel another pot of gold on the corner. Three public light buses are parked in queue underneath a haphazard display of flashing neon lights. During the next several minutes, I play chicken with oncoming taxis, public buses and the odd motorbike driver as my boyfriend snaps away, oblivious to the danger I’m putting myself in. Bus drivers on their break puff cigarette smoke out into the night air, an arm hanging languidly out the window, their faces shrouded in the shadows. Middle-aged men sit alone on public benches, eyes fixated on the illuminated square of their smartphone, ignoring the spattering rain and disinterested in the people around them. Gangly, long-legged 20-somethings clad in navy tailored suits stride swiftly on sidewalks, a slick briefcase in one hand and an umbrella in the other. Their tan shoes clip-clop in the night, a steady rhythmic beat against the discord of Hong Kong traffic and its residents, each one a conductor of their own symphony.

I want to eat one more egg waffle before we leave. I’m not even hungry but I feel it’s a must. Seconds later, it’s as if the food gods are looking over me again. We stumble across a cute yellow shop called Mammy Pancake. It appears to be a chain (later I would discover that the franchise was listed in the Michelin Guide in 2016) but I don’t care because they’re promising hot fresh egg waffles in an assortment of flavours. My boyfriend hands me his wallet and rolls his eyes. I’m like a kid at an ice cream store. My choc-chip egg waffle comes out piping hot and I can’t help but give the cashier a huge grin as he hands my dessert over.

The outside of the waffle is crispy thin while the inside is warm and doughy. The choc-chips are the perfect note bringing together a melodic combination of savoury and sweet. My boyfriend has strayed off to my right. I crane my neck to see what he’s snapping with his camera. I follow him, breaking off bits of waffle and stop short. We’re two streets back from Nathan Road now and we’ve hit the jackpot again.

A man sits underneath makeshift marquees surrounded by boxes of fruit and vegetables. I spy rows of bulbous oranges, bushy piles of cabbages and brown lumps that I expect to be potatoes. A blue plastic poncho covers his clothes and another plastic bag adorns his head. Market stall holders are packing up their wares, many with plastic bags over their head too. Further along, a man cuts a lonely figure under a square marquee. An assortment of dated men’s and women’s corporatewear hangs from the rails, the paper sale signs now soggy from the rain. Sitting on a foldout chair, he takes a long draught of his bottled beer, his eyes unmoving from the video on his smartphone. I wonder if he sits in hope of one final sale tonight on this quiet back street. 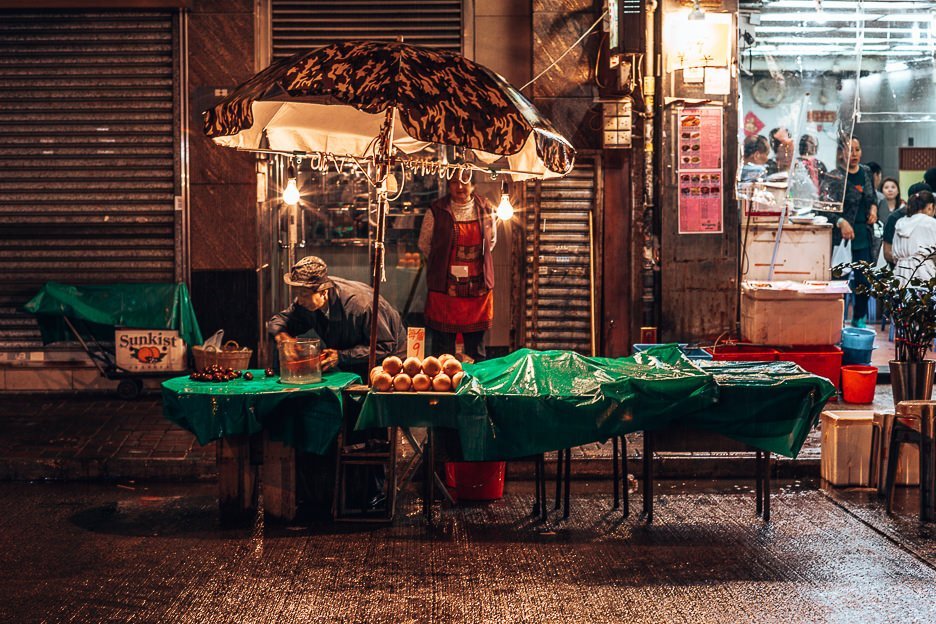 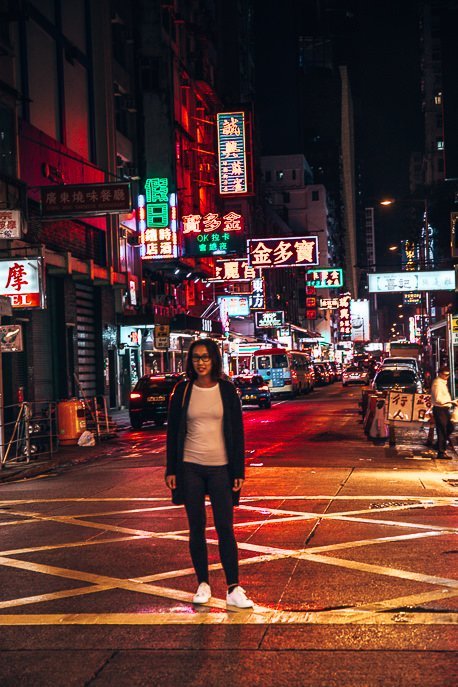 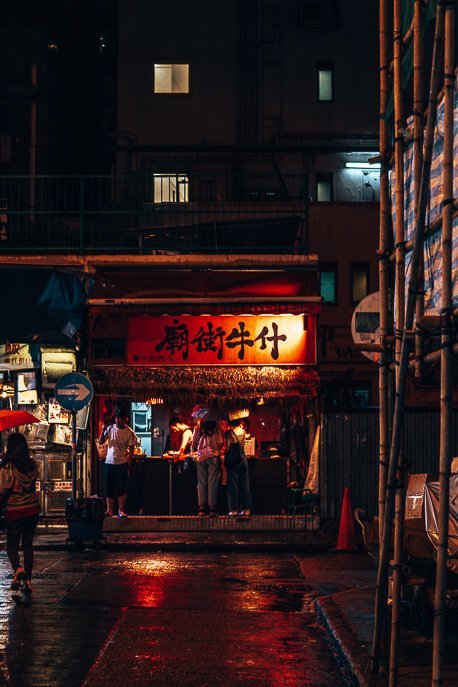 A chorus of laughter erupts from a corner restaurant several metres ahead. A stout lady emerges wearing a hairnet and dressed in a yellow apron. She manoeuvres a laden tray of hot food whilst cradling a large umbrella in the crook of her neck. Squelching along in her rubber crocs, she crosses the road disappearing down a side alley.

Clanging and shouts come from an open door on my left. We peer in and squint through a haze of cigarette smoke. A corner of a green clad table catches my eye and I hear tiles clinking. Next, I glimpse hands shuffling wads of cash. It looks like a mini casino or mahjong club. The scene is reminiscent of high rollers in a private poker game but without all the glitz and glamour. I step up on the edge of the doorway to take a closer look. Cocktails are replaced by bottles of Asian beer and dinner suits have no place here. A security guard sees me and moves to stop me from entering before realising I’m harmlessly observing from afar, while stuffing my face with egg waffle. He turns his back readjusting his earpiece and walks away.

The rain is falling a little harder now and we duck under the awnings to keep the camera dry. A door bangs and our heads snap up. A skinny man in a striped polo shirt has exited the building across the street and lights up a cigarette. The pink neon lights surrounding the head shots of dolled up girls suggests the type of establishment he has just visited. I stifle a giggle.

Within a matter of metres on this backstreet, we’ve passed farmers’ markets and gambling rooms. Brothels sit next to dingy hole-in-the-wall restaurants. Men gather on tiny stools on the pavement, slurping noodles and wontons from hot soup. Pots sizzle and trays reveal mixed stir frys. Blazing lights hang above bench seats inside cramped spaces that resemble old school diners. We pass newspaper clad walls and posters emblazoned with rows and rows of foreign script. Cooked geese and duck hang limp in windows next to bright orange tentacles and long squiggly strings of sausage-type things that must be offal or gizzards of some poor beast. The air is intoxicating, filled with familiar and strange scents. 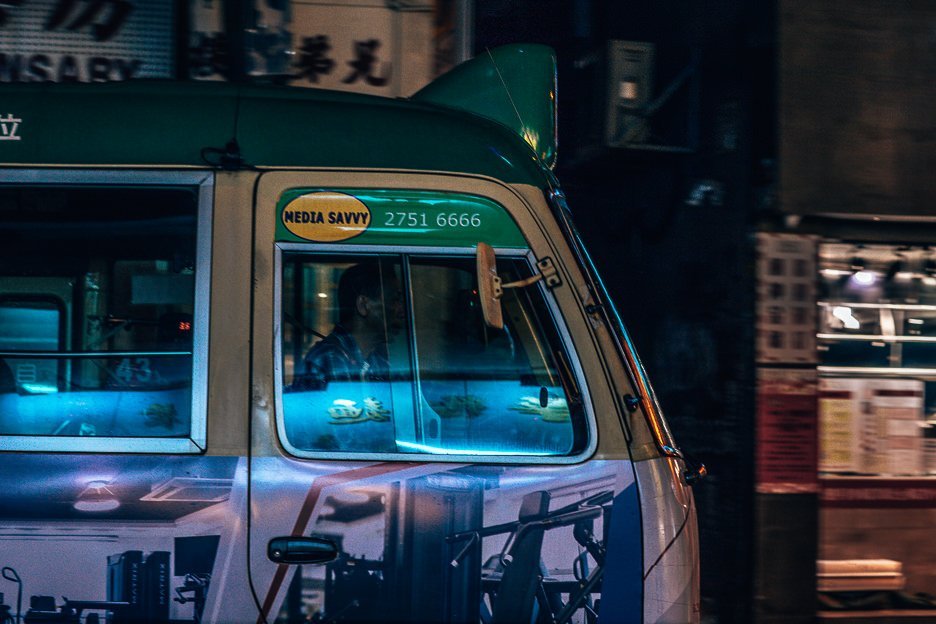 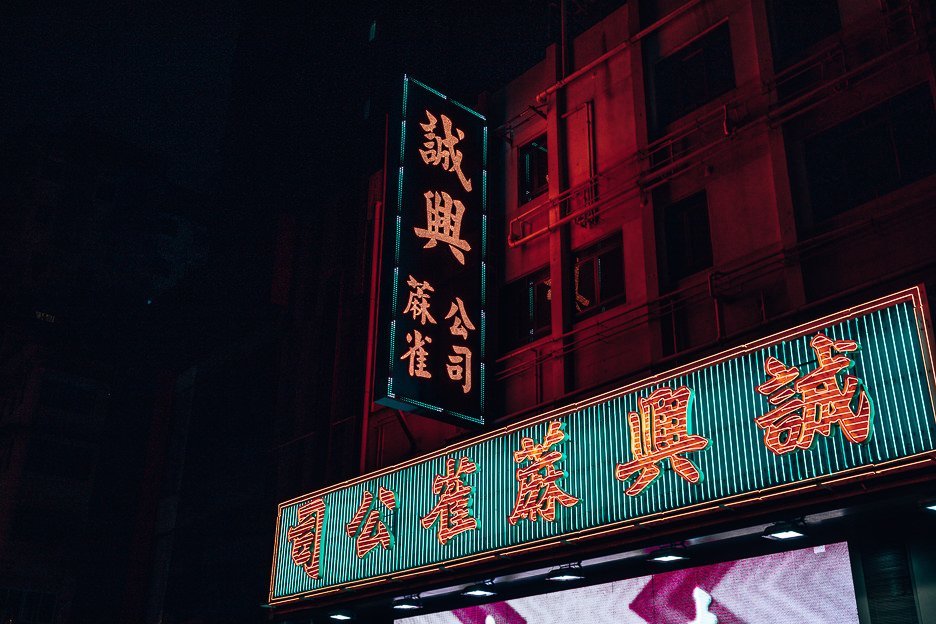 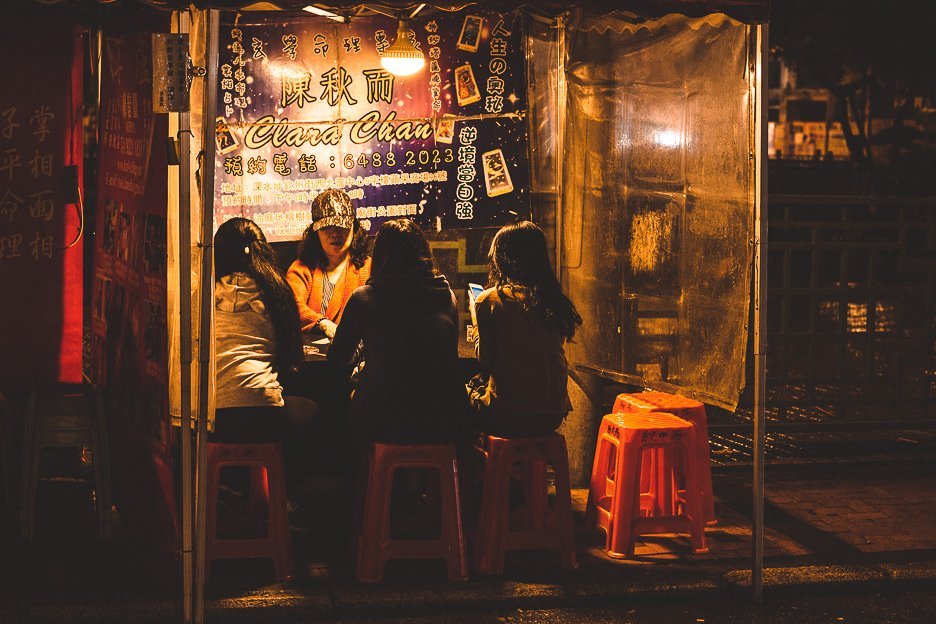 We walk past a glass-front shop revealing a room crowded with old men. The horse-racing on the televisions and discarded cards on the floor exposes another man’s kryptonite. A white-haired man scratches his head in the window as he studies the paper in his hand, while others shuffle around in a zombie-like trance with ticket stubs held tightly.

We reach the back of Temple Street Market where we’ve hit the lane of fortune tellers. Business must be slow tonight as many of the marquees are void of customers. Single hanging light bulbs and low-lit desk lamps illuminate several bored-faced or dozing vendors. I observe a couple of adolescents sitting with a spectacled woman. She holds the young man’s hand as his female companion sits wide-eyed and attentive. What are they expecting to hear?

Laughing childishly, we start walking back to our hotel. It’s been a riveting evening, one that has left me bemused and enthralled. In this city full of contrasts, we managed to discover a small pocket of chaotic beauty on one grungy backstreet. Here, we observed characters from older generations clash with modern times; whose stories I won’t have the privilege of hearing but which I’ll imagine nonetheless. This night in Hong Kong has reaffirmed my thirst for discovery, awakening a curiosity to discover a culture I find confronting yet fascinating all at once. As my head hits the pillow, I resolve to return to Hong Kong. I close my eyes, my mind filled with twinkling neon lights and the beguiling faces of Mong Kok. 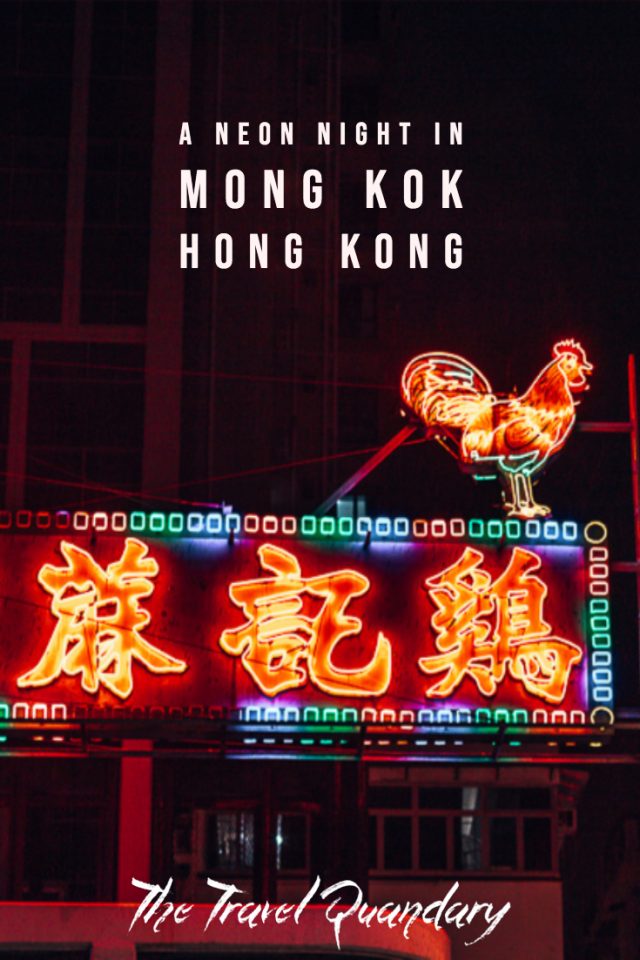 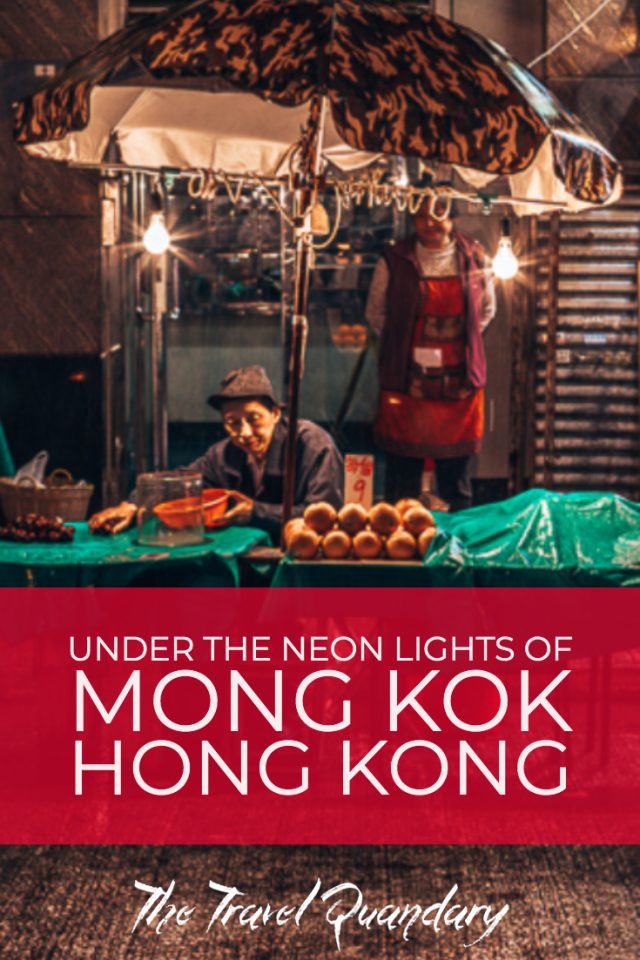 PreviousThe Ultimate Beach Packing List
NextIsland Hopping in the Philippines? Which boat tour should I choose