One Day In Tallinn Estonia

The capital and largest city of Estonia, Tallinn boasts an alluring mix of folkloric history and vibrant modern culture. The UNESCO-listed Old Town holds plenty of fairytale charm in its medieval laneways and ancient church spires. Like its neighbours, Estonia had some darker periods, having battled invasion and occupation by the Danish, German and Soviets.

These days, Tallinn is fast gaining a reputation as a major political, financial and cultural hub. The city has glided into modern times with top-notch restaurants, free wifi and booming tech scene (Skype was born here). One day in Tallinn may not be enough, but it’s a start. 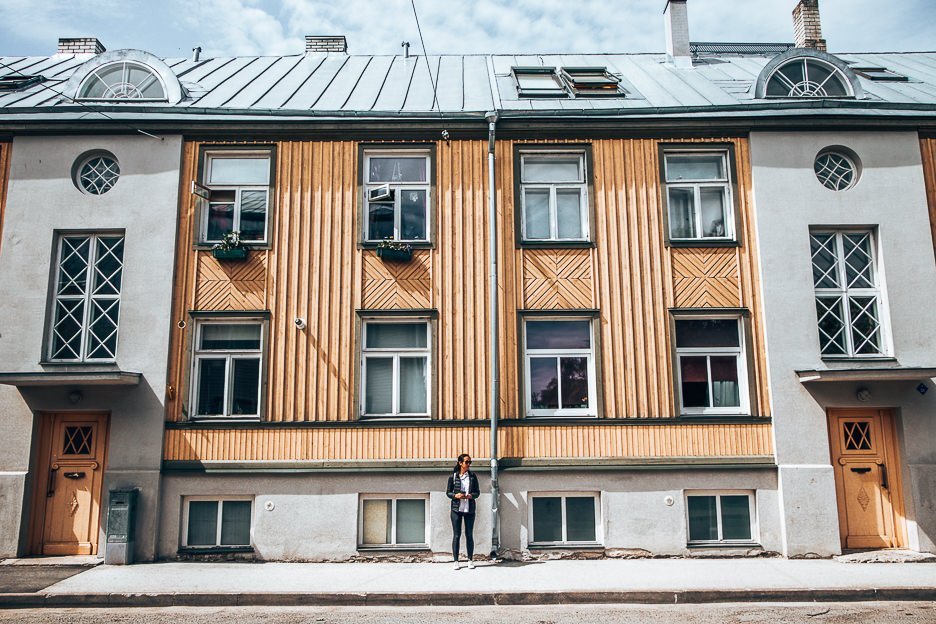 HOW TO SPEND ONE DAY IN TALLINN

For the early birds, make the most of staying in Tallinn by exploring the city as it wakes up. You’ll have the Old Town’s winding streets virtually all to yourself. Start your walking tour from Town Hall Square before venturing out from here. Some of our favourite streets included Pikk (extends to Pikk jalg), Pühavaimu and Viru where you’ll find the Viru Gate.

Work up an appetite for breakfast and enjoy the peacefulness of the morning from Kohtuotsa Viewing Platform or Patkuli Viewing Platform. Both viewpoints offer views over the Old Town, Snelli Park and Tallinn Bay. 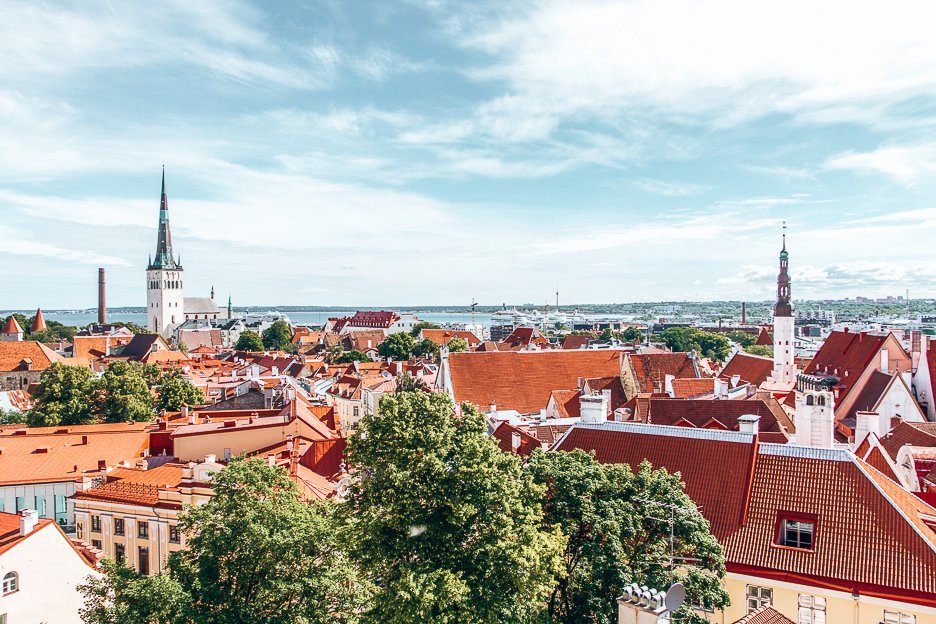 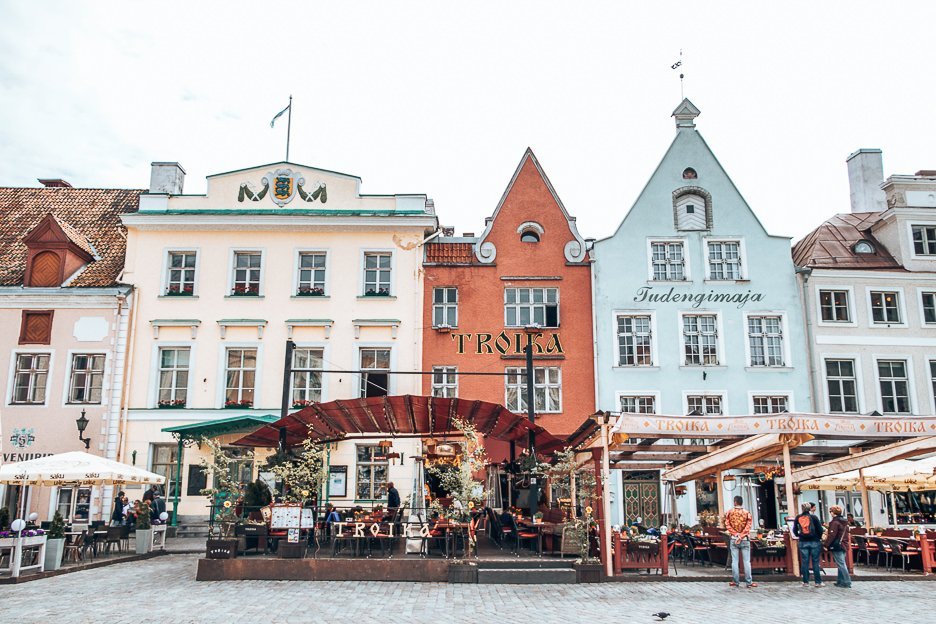 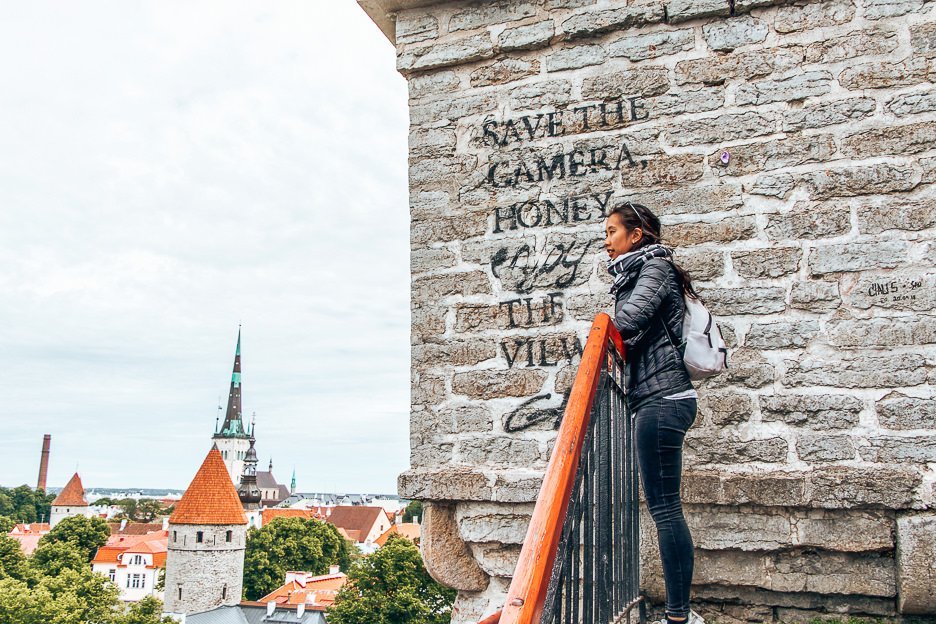 It’s time to reward yourself for getting out of bed early. Our favourite travelling breakfast is a morning pastry and coffee (with an extra shot). Given Estonia’s proximity to Scandinavia, we discovered that many menu items featured a touch of Scandinavian influence.

We found RØST Bakery which serves freshly baked cinnamon scrolls accompanied by specialty coffee from some of Europe’s leading coffee roasters. From the Old Town, it’s about a 10 minute walk to this laneway spot, depending on where you ventured during your sunrise stroll. 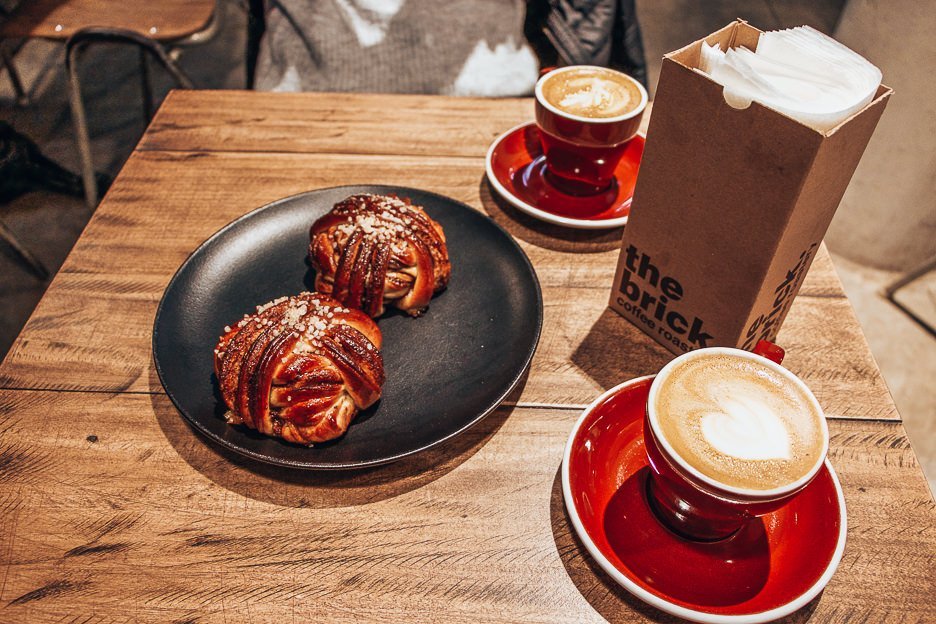 YES, WE SAID COFFEE - WHERE TO FIND THE BEST COFFEE IN TALLINN

Once you’ve devoured a cinnamon bun (or two, no judgement here!), make your way to Kadriorg Palace using trams 1 or 3. Public transport in trams, trolley buses and city line buses are operated by the Tallinn City Council. The most cost effective method to travel within the city and its surrounds is to purchase a Ühiskaart (Smartcard). You can pre-purchase day tickets or up to 10 rides on your Smartcard at selected points of sale. A non-refundable deposit of €2 is also required at initial purchase. For further information regarding Ühiskaart, refer to this handy website.

Exit the tram at stop ‘Kadriorg’ and then walk straight ahead for about 5 minutes until you see the former palace. The palace is often described as a miniature version of the Versailles Palace in Paris.

Construction of the palace began in 1718 by Tsar Peter the Great of Russia in honour of his wife Catherine. After the Emperor’s death in 1725, Catherine showed little interest in the seaside estate. The descendants of Peter I, the empresses Elizaveta Petrovna and Catherine II, visited Kadriorg Palace sporadically during the 18th century. Throughout the 19th century, the civil governors of Estonia used the palace as their residence. By the time Estonia regained independence in 1991, the palace was completely run down. Restoration works began in the same year.

In the summer of 2000, the grand palace was reopened as the Kadriorg Art Museum, dedicated to older Western European and Russian art. You simply cannot miss the palace gardens (free to the public), so make sure to walk around the building to find the sprawling setting complete with fountains. 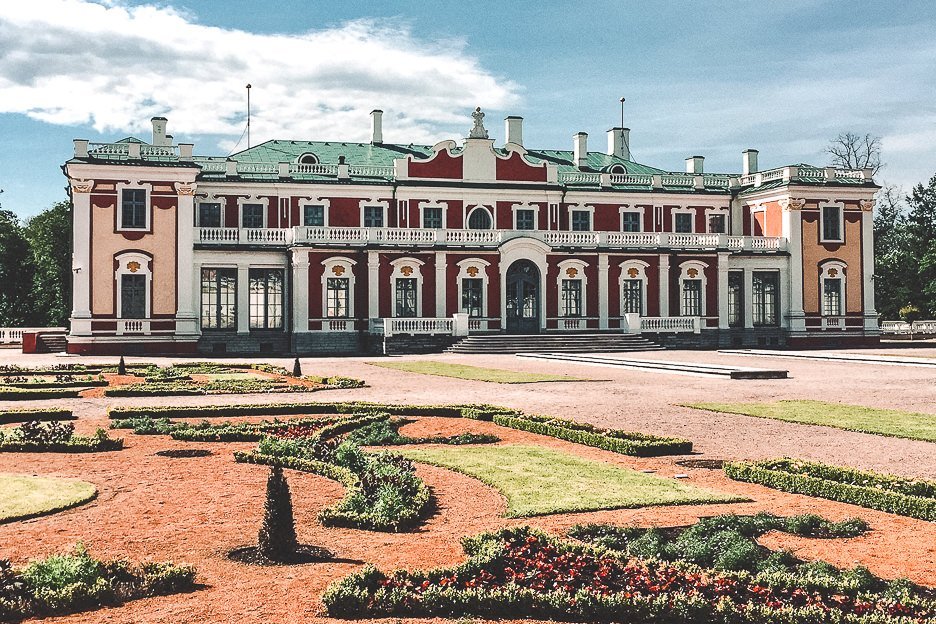 After completing your walk through the palace gardens, it’s time to head back towards the Old Town. If this is your first trip to Estonia, we recommend paying a visit to the KGB Prison Cells to learn about the country’s tortured past under Soviet rule. The basement of the building at 1 Pagari Street operated as one of the most notorious prisons.

When you emerge from the former prison cells, the Old Town streets will feel busier in comparison to your morning meanderings. The city’s location next to the Baltic Sea makes Tallinn a popular pit-stop for Helsinki day-trippers and travellers aboard cruise ships.

Vegetarian and vegan friends, rejoice! Vegan Restoran V offers a contemporary and colourful meat-free menu. For something small, choose from small bites, soups and salads. The mains include Thai yellow vegetable curry, roasted pepper walnut and chickpea burger or the oven-baked seitan tacos. We’d recommend making a booking if you can, as the restaurant did fill up during our visit to Tallinn.

If you don’t want to undo all your hard work from the morning, then head towards Kompressor, a few steps down the road. The pancake restaurant serves savoury and sweet choices for something a little lighter. 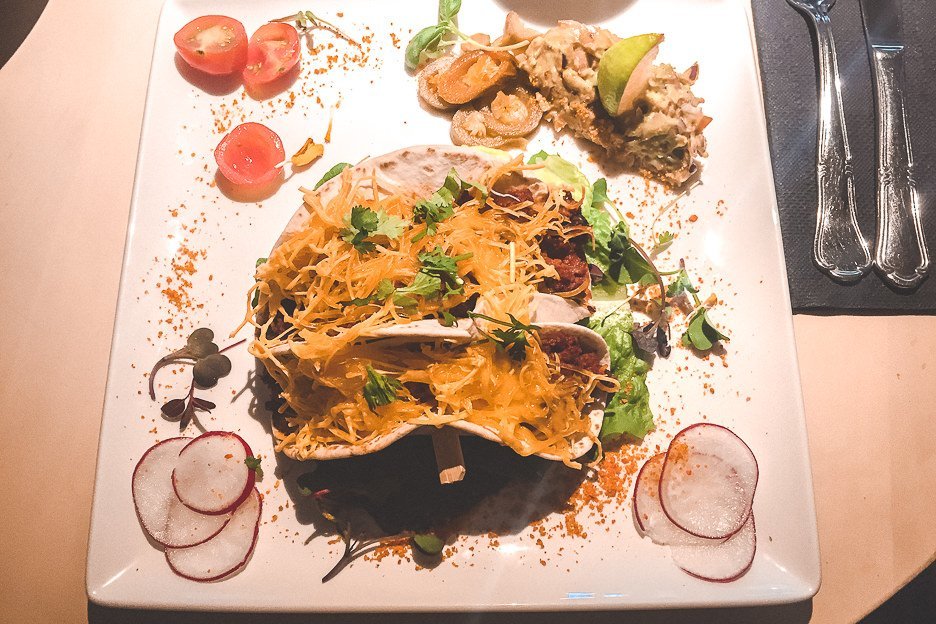 There are a couple more stops in the fairytale Old Town before switching gears to see how Tallinn is evolving into a modern day city. Pay a visit to St Mary’s Cathedral or Tallinn Cathedral. Constructed by the Danes in the 13th century, it is the oldest church in mainland Estonia. The church features a Baroque bell tower which visitors are able to climb for a small entrance fee. This opportunity is limited to hours around worship and professional services as well as the availability of volunteers (unfortunately, we were unable to climb the tower the day of our visit). 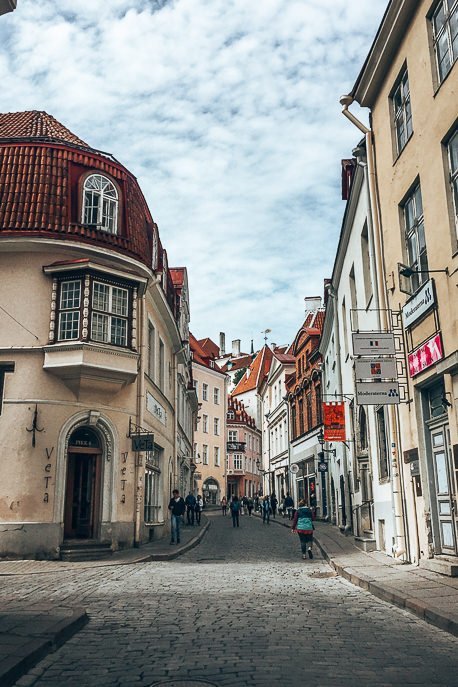 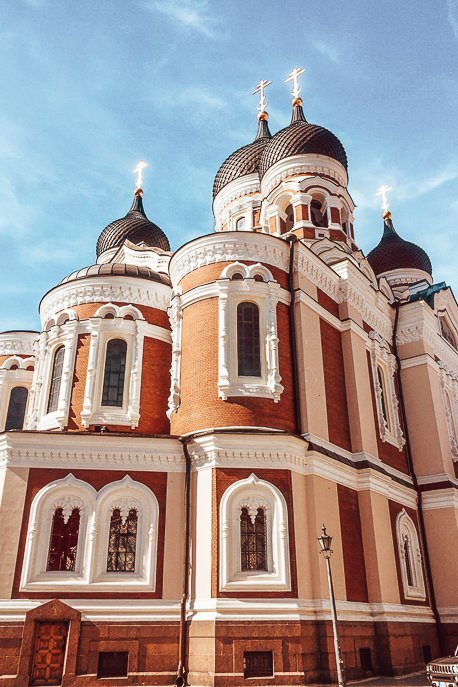 Nearby atop Toompea Hill, make sure to admire Alexander Nevsky Cathedral. Constructed in the 19th century when Estonia was part of the Russian Empire, the cathedral was intended to symbolise the empire’s dominance, religiously and politically. With spectacular domes and impressive mosaics, it is the largest orthodox, most opulent cathedral in Tallinn. It is well worth a visit, however, photos are strictly prohibited inside.

Wander over to Telliskivi. The former industrial complex has been transformed into a creative hub housing cool restaurants, boutique shops and local markets. Come night time, crowds flock to the converted caravans and train carriages that dish up street food and cool cocktails. 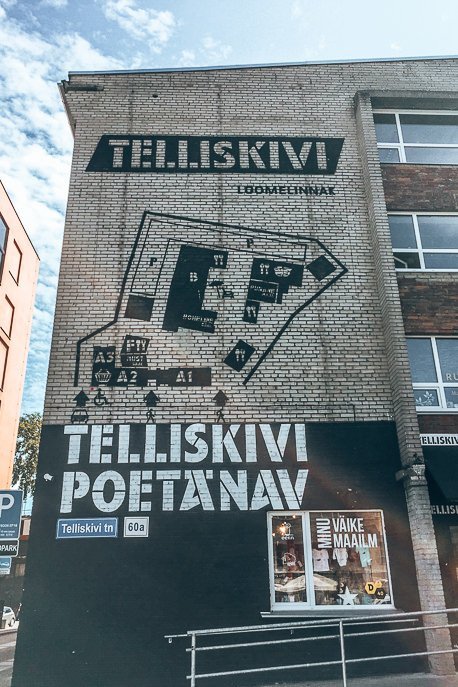 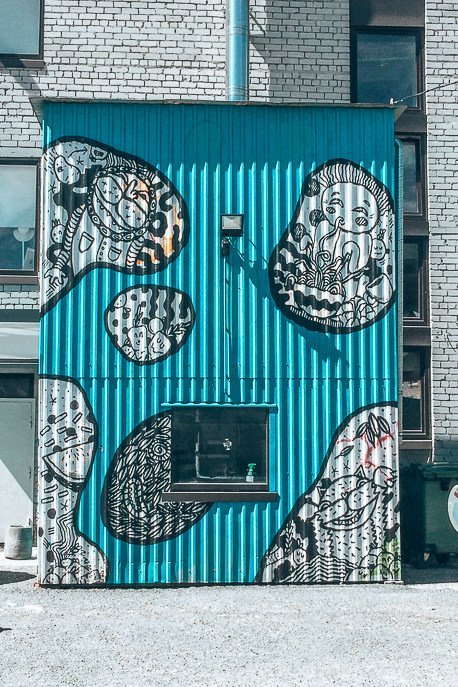 If you have the palette and some extra cash in your pocket, take a taxi or an Uber 30 minutes from the Old Town to (your reservation at) seaside establishment, NOA Restaurant.

This world-class restaurant has been rocking the shoreline of Pirita since 2014. Star chefs Tõnis Siigur and Orm Oja bring bold international flavours with exquisite attention to detail in every aspect. The restaurant seats up to 80 guests and is divided into the restaurant and the more intimate Chef’s Hall. The decor is sleek and modern, allowing plenty of light to fill the building. We celebrated a birthday during our visit to Tallinn so without hesitation, we accepted the offer to dine in the Chef’s Hall.

Thanks to its innovative design, every table at NOA restaurant has a view of the sea. A degustation is said to be an “experience”, and this is one that we certainly will not forget. Polishing off 11 courses with matching wines, the added bonus was the opportunity to see the chefs in action.

Tomato was blanched and dehydrated, sprinkled with blue cheese, chives and umami. The Black Angus beef was drizzled in fire oil and our palate cleanser arrived in bowls carved from ice. We could see and subsequently taste the care and precision that went into every element, thus validating all the euros we spent too! As an additional memento, each guest of the Chef’s Hall receives a signed menu and a visit to their table from the Head Chef of the evening.

HOW TO GET TO TALLINN

If you’re planning a day trip to Helsinki from Tallinn then check out this guide to one day in Helsinki.

Is one day in Tallinn sufficient? Let us know your thoughts below! 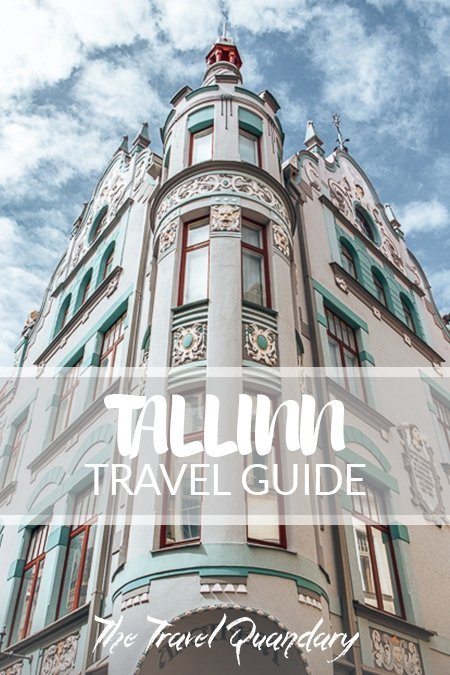 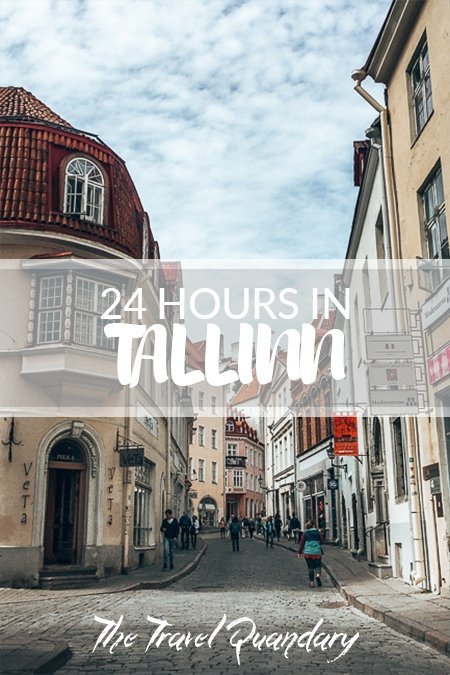 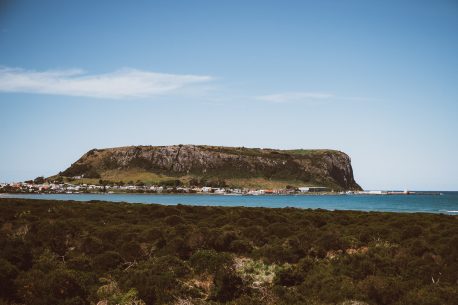